Home / News / From the principal 2

Never before has a generation been so dependent on their parents

Last year I read a book titled ‘Spoonfed Generation- How to raise independent children’ by Michael Grose. Michael is one of Australia’s leading parenting and educational writers and speakers.

In Spoonfed Generation, Michael explains the importance of children’s independence and the vital stages to letting go. He argues that never before has a generation been so dependent on their parents and suggests now it’s time to remove the spoon and put it back in the drawer.

In July last year, an Australian Story segment aired on the ABC TV about an Australian father who took his son on a six month African adventure. This dad believed that offering his 14 year old autistic son Sam more of the same, which was order and routine, was never going to develop the self-sufficiency and communication skills that he needed for a successful transition to independence.

So he turned conventional thinking on it’s head and backpacked with his son throughout Africa for six months. He thought that adolescence, like infancy, is a time of great learning, which is best precipitated by chaos and unpredictability.

In Africa, his son had many new and challenging situations that required him to find new ways of coping and communicating. By making Sam feel uncomfortable rather than protecting him from personal challenges, his son rapidly improved his communication skills and he was able to have lengthy conversations with strangers. His self-sufficiency developed to the extent that he could pack his bags, organise his own schedules and prepare his own meal. All these activities were not possible for him when he lived in Sydney.

These huge developmental leaps didn’t occur in adult-controlled environments, with his parents doing everything for him, but in the dusty outback of Africa. Here he was exposed to people from different backgrounds and enjoyed outdoor adventures such as white-water rafting and other high-risk activities that he had not experienced before. 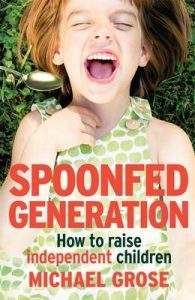 In Australia, we have removed many of the risks from childhood. Playgrounds are now so safe they are becoming boring; fortunately, at Quintilian School we have an outstanding outdoor playground where there are suitable risks for our students to experience and challenge them. Quintilian students are allowed to run, play chasee, throw and kick balls, fall over and get hurt, rebound and get back up. Resilience is built on being beaten, losing, being disappointed, but learning how to recover and have another attempt!

Michael wrote in his book Spoonfed Generation, kids need risk if they are going to extend themselves and become truly independent.

Removal of risk leads to anxiousness

The result of raising kids where parents do everything for them and always fight their battles is that we may have just raised the most nervous, risk-adverse group of kids that we have ever seen. Let them mess up and then get themselves out of the problems they made rather than rescue them from dumb decisions.

The sad part is that most adults recognise that the freedoms we enjoyed as kids away from the constant monitoring and supervision of adults provided fantastic opportunities for growth and development. Yet we don’t seem to be granting our kids the same opportunities for freedom and autonomy!