Australia Talks National Survey 2021 found parents at independent schools had the highest rate of satisfaction with the education their child is receiving at 92 per cent, compared with 85 per cent in the Catholic sector and 77 per cent for public schools.

A recent Australia Talks National Survey 2021 found parents at independent schools had the highest rate of satisfaction with their child’s education at 92 per cent, compared with 85 per cent in the Catholic sector and 77 per cent for public schools. This satisfaction was mirrored in other areas such as community involvement, smaller class sizes, and quality of teaching.

The ABC Article Australia is an outlier on private schools – but that’s the way many parents like it highlights the findings, which have been mirrored by “a larger dataset from the Australian Bureau of Statistics, which found independent schools are the fastest-growing school sector in Australia.” 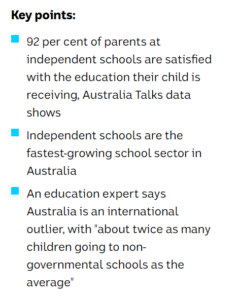 Quintilian School is proud to be part of the cohort of independent schools offering an outstanding educational experience for all of our students and their families. Academic excellence and rigour is pursued, but equally, wellbeing, social skills, physical health, and the arts are of vital importance in preparing our children for secondary schooling and their place in society.

Our aim is to maintain a teacher to student ratio of 1:20 and this allows our teachers to know, understand and cater for the needs of each child.

Quintilian students move into the local independent and public high schools with the confidence and skills to make the transition smoothly. Each year several of our students receive scholarship places. These schools regularly comment on the exceptional quality and character of Quintilian children.